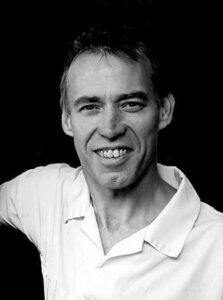 Our major exhibition for Autumn opens with a preview evening on Thursday, 18 October and continues for eight weeks.
In this first guest blog, the artist Ian Pearsall tells us about his inspiration, process and journey to becoming a professional artist: 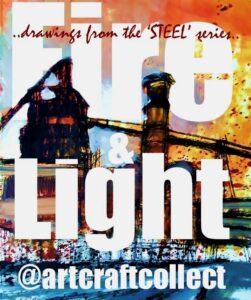 “It is spoken in the family story that my Granny as a young woman in the early years of the twentieth century along with her brother Harry and two other sisters, walked the two-hundred and forty three miles from the tiny Scottish coastal town of Ayr to Stoke-On-Trent, my home town. The finer details of this great trek have been eroded by time and by the passing of all whom who undertook it even if the memory of them as individuals has not diminished. Her husband, my Grandad hailed from the Black Country where our name is more prolific and a significant piece of the family story begins here in Stoke.
I was born in Salisbury, Rhodesia in Central Africa. My father, the son of the aforementioned union travelled his own journey – it must be in the blood! The war for independence that created Zimbabwe was not my father’s war, and thus we (I was a one-year old on this journey!) drove the three-hundred and sixty-five miles to Blantyre, in Malawi where we lived and I grew up and was schooled for the next sixteen years. In 1984 I made my own journey – here to the UK.
One of the first things I did was to visit Blantyre in Scotland; birthplace of Dr. David Livingstone – the man who put the place where I’d spent the early years of my life on the map. It is with a huge sense of adventure that I now bring my work here to Edinburgh by the kind invitation of Linsay Given Black of Art & Craft Collective, and I am truly delighted and honoured for yet another great connection with Scotland…

“…long fields of ironstone glowed with all the colours of decadence. The entire
landscape was illuminated and transformed by these unique pyrotechnics of labour
atoning for it’s grime, and dull, weird sounds, as of the breathings and sighing’s of
giant nocturnal creatures filled the enchanted air.”
Arnold Bennett: Anna of the five towns

Stoke-On-Trent is the epicentre of my creative world – I saw the light here after a good few years in the creative darkness. On a winter morning several years ago whilst walking my faithful Bassett Hound around the largest of the city’s lakes, a bottle-shaped chimney rose proudly up through the mist and stood cold and dormant against the backdrop of a winter sky. I drifted over to it at the speed of lazy dog until stood up against it, and then marveled at it’s architectural significance – a most considered brickwork with a wonderfully ornate patterning of the flute.

Why ‘STEEL’ ?
Following my successful ‘Black Streets’ Exhibition at Trent Art Gallery through which I painted my first passion; the people’s architecture – the terraced houses of the great working people (in any British city) I finally got around to following a family story, that of my great-great granddad William Asher who started work at The Shelton Bar Iron Company aged just sixteen back in 1859.
Shelton Bar is a huge story in the history of Stoke-On-Trent employing over ten thousand people at it’s peak. It was the reason why the city was bombed by the Luftwaffe during the Second World War, and following it’s closure the land was used for the second great Garden Festival in the UK to reclaim the land it stood on. I’ve taken a tangent with this ‘STEEL’ Series – I wanted to free up my style after working on the ‘Black Streets’ – I wanted to convey the excitement; drama, light, smoke, sparks and fire and all that working with STEEL implies. I took a train ride to Saltburn a couple of years ago and happened to pass through Redcar alive with activity … my camera never stopped all the way through! Here is that experience …

Over the last year or so I’ve been in collaboration with Dave Proudlove, ( @fslconsult ) culminating in a book illustrating his autobiographical book project titled ‘Ballad of the Streets’. Dave is a raging furnace of ideas who’s penmanship is worth the wait every Wednesday in The Sentinel, and is no stranger to this creative tome Ï believe! Dave wrote an article on my ‘Icarus’ exhibition at Gallery 116 in Stoke entirely from research without meeting and I was awed!! Dave spotted his story in a painting of mine, and that spawned a meeting, and subsequent conversations of kindred thinking over beers in The Congress Inn, Longton. I met him once and felt like I’d known him a lifetime, he’s that kind of chap!

Dave’s beautiful words echo a lot of my sentiments of the city … ” Ballad of the Streets is a look back at my coming of age in a working class neighbourhood as It’s city lost It’s industry and some of It’s purpose. It is a love letter to It’s people and the lives we livedtogether. It is a howl of fury at misguided and damaging political decisions that have eroded the character of such places, and affected people’s lives.
It is also a look at the human condition in a place without definition. It is part memoir, part social commentary, laced with emotion and dark, dark humour.”
We both work with Lindsay Bainbridge ( @MinxyOwl ) who’s a creative sauce and mutually bonkers, and who got us together in the first place – I don’t think we ever even arrange to meet each other – Lindsay you’ve got a lot to answer for girl!!! Twitter is the central given in our mutual universes – Lindsay is a forcefield of communicative energy. It’s a terrible thing but sometimes I acquaint with people by saying ‘oh you’re @…..’
I don’t think I should bang on about my work, it should have the power to speak for itself if it’s any good! Come and see ‘Fire & Light’ at The Art & Craft Collective at 93 Causewayside, in Edinburgh, ( @artcraftcollect ) and you tell me about it … tell me about you and your story …
See you around …”